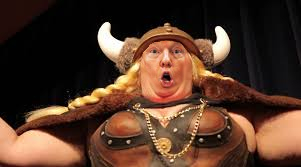 The vote to release of the House Intelligence Committee’s “secret” memo (and the vote to suppress Dem committee members’ minority report. The pressure on, resignation of, and subsequent humiliation of FBI Deputy Director McCabe, and the GOP and right wing media echo chamber’s FBI/Secret Society/Conspiracy Du Jour smearing of Mueller, while Mueller’s investigation of Trump’s high crimes and misdemeanors marches forward to a steady drumbeat….it feels operatic.  Will Trump stay ‘on script’ tonight, dutifully reading the teleprompter to media acclaim of his presidential and dignified address, or will we get the shrieking Valkyrie, calling doom upon his enemies?

More likely, given the low bar he (and his spiritual predecessor Bush) established,  he will mumble incoherently through a journeyman address, then go crazy tomorrow in the AM and tweet doom upon his enemies from the toilet.

Sadly, we’re still suffering through the Seigfried stage of the Ring Cycle, with the protagonist seemingly unstoppable, and we still have a ways to go before we watch his downfall in the Gotterdammerung, following the 2018 elections, victory of the Dems and subsequent impeachment hearings.